Heritage is a magical word that turns buildings into symbols that define a nation and cities into thriving crowd-pleasers. For an island which has a rich history spanning over 2,500 years, heritage is intrinsically linked with its identity and civilisation. Just like any other aspect in life, civilisation also grows, flourishes and disappears.

Nevertheless, traces of civilisation have become almost immortal in the forms of ancient cities, evocative ruins, aged scriptures, medieval architecture, vibrant traditions and descendants of indigenous tribes. You don’t need to be a history buff to be awed by the jaw-dropping feats accomplished by Sri Lanka’s ancient civilisations.

Sri Lanka, or Ceylon as it was previously known, is a treasure trove of religious and cultural heritage, and you are sure to stumble upon intricate elements of its history and heritage when you visit this paradise isle. From the abodes of prehistoric men to eight ancient capitals which were once the royal seat of residence, and from stupas that touch the sky to unbelievable artistry of our forefathers and elegant colonial edifices, Sri Lanka delivers an overwhelming dose of history. Topping it all off are the UNESCO world heritage sites scattered across the island including the Sigiriya Rock Fortress, Dambulla Cave Temple, the heritage city of Kandy and the Galle Fort. 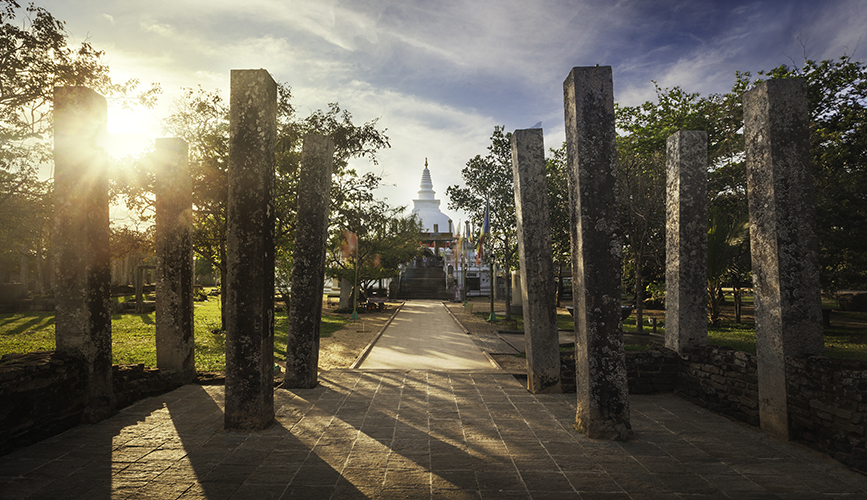 The famed Cultural Triangle is the cynosure of the island’s heritage. Let your minds drift through the tides of time as you traverse through this history-rich site. The Cultural Triangle consists of a trio of prominent sites that form a triangle: Anuradhapura to the north, Polonnaruwa to the east and Kandy to the south-west. Within the triangle are also several other historic sites spanning from Dambulla and Mihintale to Ritigala.

Despite the traces of history that resonate beneath ancient facades, the traditions and customs have their own way of depicting the exotic aesthetics of Sri Lanka. A beautiful spectacle that showcases color and vigor, the Kandy Esala Perahera for example, is a joyous procession which adorns the streets of Kandy around August. The blissful kovil poojas that pay homage to the divinity, the thovil shanthikarma intended to ward off demons and fascinating puppet shows are some of the bewitching elements of local traditions.

The island’s indigenous people or the Veddhas (forest-dwellers) have perhaps been on the island since 30,000BC. Initially hunter-gatherers, the veddhas have a unique way of living. Their food, rituals, arts, crafts and medicinal practices are remnants of the past, preserved for posterity.

Sri Lanka is a melting pot of culture and diving into the depths of the island is the ideal way to take in its exuberance. While travel is meant to transform you in a positive way, let it be Sri Lanka or any another corner of the world, do not forget to glimpse into its heritage of different cultures and contrasting aspects, for it is indeed an vital cornerstone in building a better world.