Traders and explorers from far-off lands have for centuries been lured to this paradise isle by the exquisite aroma of Ceylon Cinnamon. Long before tea became an integral part of Sri Lanka’s identity, the unassuming bark of the cinnamon tree managed to pull traders and travellers with its sweet and spicy warmth, and with this also came good fortune.

The commercial value of this exotic spice, which has historically been considered the world’s finest, was first glimpsed by a foreign nation in 1505 when the Portuguese discovered the route around the Cape to India. Since this spice was considered as a gift fit for royalty, it is said that the then Ceylonese king had sent cinnamon to Portugal as a tribute from the island nation.

The bark of true Ceylon cinnamon is paper thin and golden brown in colour. And most notably, it has a sharp yet pleasant fragrance that would tingle your nostrils. You would find cigar shaped golden brown quills all over the world but it is a little known fact that most of them are actually “cassia”, which is grown throughout Southeast Asia. True cinnamon, however, is grown only in Sri Lanka. 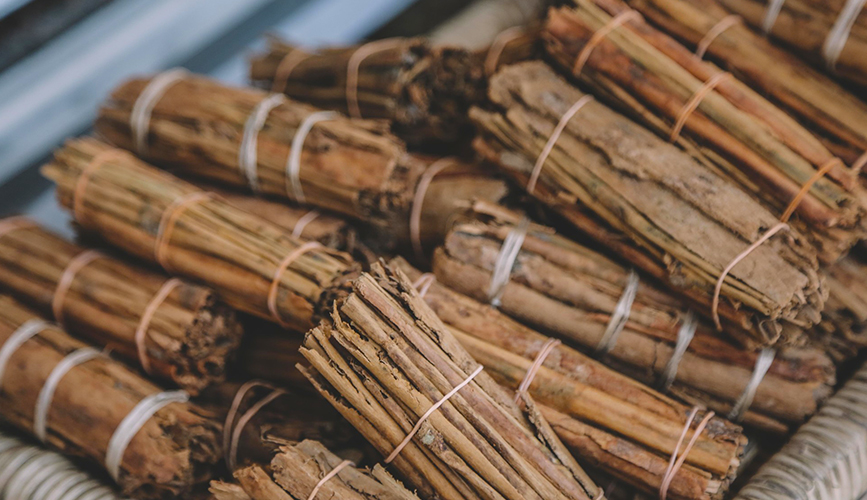 Locally known as “kurundu”, cinnamon was one of the secret ingredients of the culinary art in Sri Lanka for millennia. The islanders whipped up delectable cinnamon-inspired culinary delights even before the Europeans started baking cinnamon rolls. Even today, you can taste those subtle traces of cinnamon in many of Sri Lankan dishes starting from curries to sweetmeats and desserts.

Ceylon cinnamon was cultivated on the island’s western as well as southwestern coastline because of its ideal climate conditions. The “Cinnamon Gardens” in Colombo, which is now a chic prime residential area, was once a thriving cinnamon grove. Though the process of processing cinnamon is painstaking, the end product it brings into your hands is pure bliss- sticks of sweet-scented cinnamon. Today, Sri Lanka supplies over 70 percent of the global production of true cinnamon and has a massive demand due to its unsurpassed flavour and aroma. Cinnamon also has a host of medicinal properties that doubles its value.

If you wish to explore the depths of Ceylon Cinnamon, you must visit a cinnamon plantation where you can smell the sweet woody aroma from miles away. Also, the art of peeling cinnamon, which requires both skill and patience is worth witnessing once in Sri Lanka.