If there is one thing you must do on a holiday in Sri Lanka that is to taste a cup of Ceylon tea. From a coffee rush to a tea tale, the start of the tea industry in Sri Lanka is as refreshing as the brew itself. The tale of the brew that put this teardrop-shaped island on the map unfolds amidst the rolling hills of the island.

In 1867, when the island was thriving with coffee plantations, James Taylor, a Scottish planter was entrusted to assess the commercial feasibility of some Assam tea shrubs, which marked the birth of Ceylon tea. Taylor, who was the superintendent of Loolecondera Estate near Kandy, planted eight hectares of tea, and perfected the art of growing the new crop. The historic Loolecondera tea estate can be visited even today where you can witness the fire place of his rustic log cabin that has stood the test of time and the fields in which the original tea was grown as well as a little museum.

With “Devastating Emily”, a fungal disease which wiped out the coffee production of the country in 1869, Ceylon tea claimed the place and became a world-favourite brew. In Taylor’s days, a pound of tea leaves was sold in Kandy for Rs 1.50. For the colonisers who suffered due to the coffee catastrophe, tea became their lucky charm that once again saved their financials that were almost in ruins. 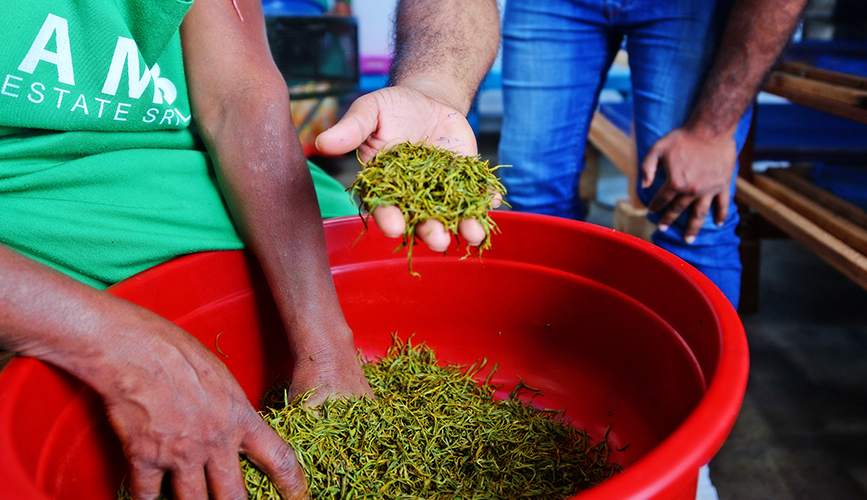 The balmy breeze of the looming hills, rich red soil and nourishing weather of the hill country, among other natural features of the island, create the unique taste of Ceylon tea that comes in a myriad of flavours. From a light floral brew to a strong dark cup of tea, the various Tea Leaf Grades make for teas to reinvigorate everyone’s palette. The one million Ceylon tea packets sold at the Chicago World’s Fair in 1893, marked a milestone in Sri Lanka’s history of tea. Known as “The Black Gold of Sri Lanka”, Ceylon tea has become an essential part of the island’s identity.

Today, decades after the departure of the British planters, aspects of the industry have changed much, but the distinctive taste of Ceylon tea has remained the same, preserving its hallmark quality. Whether you are indulging in a lavish afternoon tea spread at one of London’s most luxurious hotels or enjoying a chit-chat with a warm croissant at the Blue Box Café at Tiffany & Co. in New York, chances are that you will be offered a cup of Ceylon tea.

Yet, the best way to experience the art of making Ceylon tea, the how, why and what of this trade, is to visit a working tea plantation. You can indulge in a spot of artisanal tea tasting or make your journey to misty hills of the island to glimpse the exciting journey from the bush to cup.